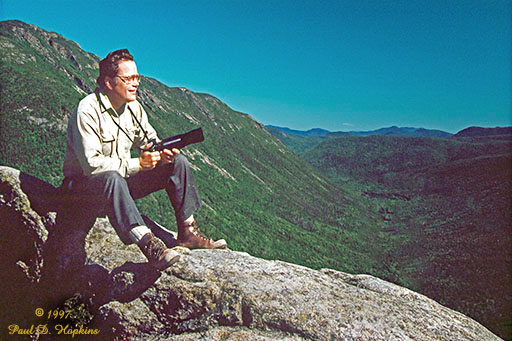 Hi!, I'm the person behind GRAND IMAGES. This is a picture of myself on Mt. Willard taken in 1997, the same year in which Grand Images was launched.

Photography classes that I have taken showed me that there is more to photography than just carefully snapping pictures. There is the 'dark room' where photo magic is really made. Did you know that Ansel Adams did his best creative work in the dark room. He would visualize a scene, take a photograph, and then finish the picture in his dark room.

Ansel Adams used an enlarger, photo paper, and chemistry to work his magic, but today, we have computers, scanners, and sophisticated software, a virtual digital dark room in which to work 'magic'. In the digital dark room, we can not only perform the traditional photo manipulations, but also repairs and specialized effects that cannot otherwise be easily done.

Consider the above late afternoon picture of myself on Mt. Willard overlooking Crawford Notch. It has been digitally modified from the original photograph. The foreground rocks and myself have been enlarged two times, trees have been cloned over the distracting highway and railroad tracks, and the shadow of Mt. Willy has been removed from the up slope of Mt Webster on the left side of the picture.

I've been enhancing and restoring my photographs for fun and profit since 1997, and I can do the same for yours.